On This Day: April 2nd Team India Lift The World Cup for 2nd Time: On April 2nd 2011, MS Dhoni Secured The Great Dream With A Six

April 2nd has a special place when it comes to Indian cricket. Fans can not forget 2nd April 2011 when India became world champion for the second time. MS Dhoni became the second captain after Indian bowling legend Kapil Dev to bring ICC World trophy to India. Before MS Dhoni many captain lived this dream but unable to realize, in 2003 Sourav Gangualy and team came very close but finally lost to Australia in Finals.

The 2011 ODI world cup was very special, it was hosted in India, it was also the last time the great little man was playing World Cup. The finals was played in Mumbai, the ground of Sachin Tendulkar, it was his last chance to lay his hand on the coveted trophy. MS Dhoni sealed the game for India in style with a six, and that moment became immortal for Indian fans. Even great Sunil Gavaskar said, “I will watch the Dhoni last winning shot of the World Cup before I die’?” 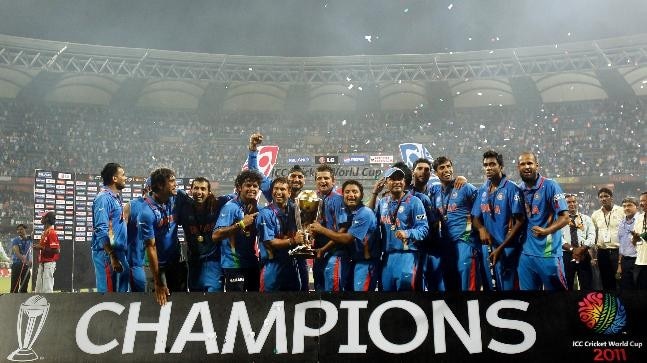 In reply India didn’t get good start as Lasith Malinga rocked Indian inning with twin below. Virendra Sehwag was out for a duck, then he took the wicket of the match when he removed Sachin Tendulkar at 18 and created a pin drop silence. Then Gautam Gambhir took up the responsibility and played a brilliant inning of 97, however, the inning of the match came from Indian captain MS Dhoni. Dhoni decided to promote himself ahead of man of the tournament Yuvraj Singh and played the in inning of his life and scored 91 of 79 deliveries unbeaten.

What made his inning special he sealed the victory with a six. When he smashed Nuwan Kulshekara for six not only he created history but also he created a moment for the people of India to cherish. Yuvraj Singh was instrumental throughout the tournament with bat and ball, even in the final match he picked up two important wickets and made 21 not out. In 2011 world cup Yuvraj scored 362 runs in 9 matches with and astounding average of 90.50 and not only that he picked 15 wickets as well. His staggering performance ensured India the second world cup after 1983 heroic.