ICC Women’s World Cup will be starting soon. It is on 24th June 2017. ICC Women’s World Cup 2017 Live Stream available on Hoststar in India. The final match is on 23rd July. This world cup will take place in England. The top eight teams will play 28 matches to grab their place in semi-finals. The matches will go on for 22 days.

Finally, the day of ICC World Cup has just arrived. All the players are very excited. The match will have challenges as well. This tournament has all world women’s best team.

These matches are organized in different cities of England. The final match will be held at Lord’s ground. The first match is between New Zealand and Sri Lanka in Briston. On the same day, there is the match between India Vs England in Derby.

The teams that are participating in this world cup are New Zealand, Sri Lanka, India, England, South Africa, Pakistan, Australia and West Indies.

Matches from the Women’s World Cup will broadcast in Australia on Fox Sports and Channel Nine, in New Zealand by Sky TV, in the Middle East and North Africa by OSN, in South Africa and sub-Saharan Africa by Supersport, in South East Asia and China by Fox Network, in the sub-continent (excluding Pakistan) on Star Sports, in Pakistan on PTV and TEN Sports, in Sri Lanka on Channel Eye and in the USA on Willow TV. The coverage will be provided on linear and digital channels.

Mithali Raj is the captain of the team. This team consists of three all-rounders, four bowlers, six batsmen and 1 wicket keeper. Biju George is the fielding coach.

These are all very talented and enthusiastic players. The first match they will play against England. Lots of expectation from this team. Recently this team had played well against South Africa and had break ODI’s record. 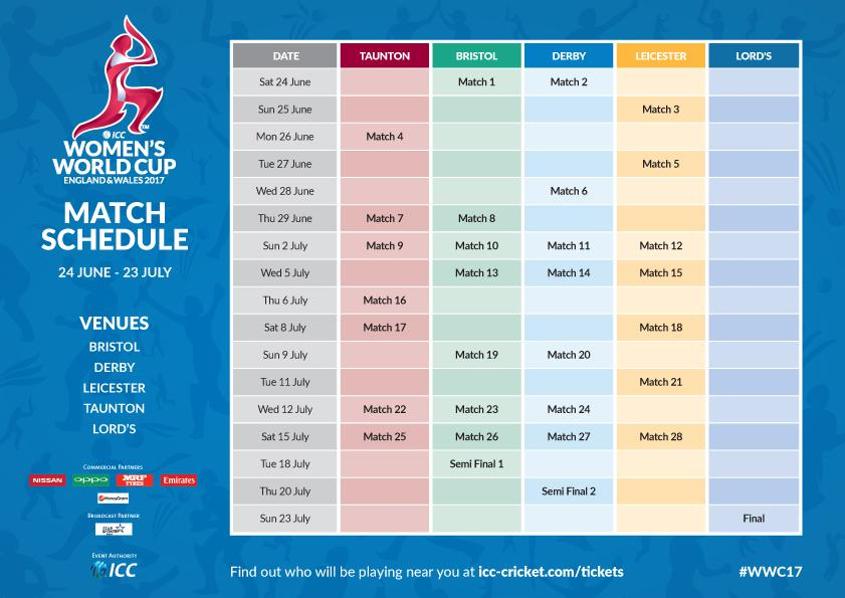