F1 fans will be elated as the high speed action of Formula 1 will shift to Spain as we towards the closure of second triple header. The sixth round of F1 will take place at Circuit de Barcelona-Catalunya. The event will be hosted between 14 August to 16th August 2020. Max Verstappen and Red Bull broke the winning streak of Mercedes at 70th Anniversary GP in the fifth round of F1 at Silverstone. The brilliant tyre strategy and exceptional driving skills of Max Verstappen brought to the halt of Mercedes winning run. It will be interesting to see if Red Bull can challenge Mercedes at  Circuit de Barcelona-Catalunya as Ferrari already confirmed that They won’t be having a winning car until 2022. Sportsfeista brings you complete details of F1 Spanish GP 2020 Live Stream, Schedule & Live Telecast Info Formula 1 Aramco Gran Premio De España 2020.

Spanish GP will present Lewis Hamilton a chance to beat the record of Michael Schumacher of most podiums of all time. In 70th Anniversary GP  Lewis Hamilton who is currently on record breaking streak just equaled Michael Schumacher’s record of most podiums of all times in second round of British GP. Now Mercedes Team Principal Toto Wolf admitted that Mercedes had the slower car in second round of British GP. It was quite evident as well as the lost to car which started from the fourth position. This should give Red Bull some extra hope repeating Anniversary GP performance as Circuit de Barcelona-Catalunya. The midfield battle is getting intense as McLaren, Renault & Racing point starting to come up with interesting performances.

The great Michael Schumacher and the great @LewisHamilton are now tied for the most all-time F1 podiums 🙇‍♂️ 🙇‍♂️#F170 🇬🇧 #F1 pic.twitter.com/WM1vRXkt78

When Is Spanish GP?

Where is Spanish GP?

Which Race it is? 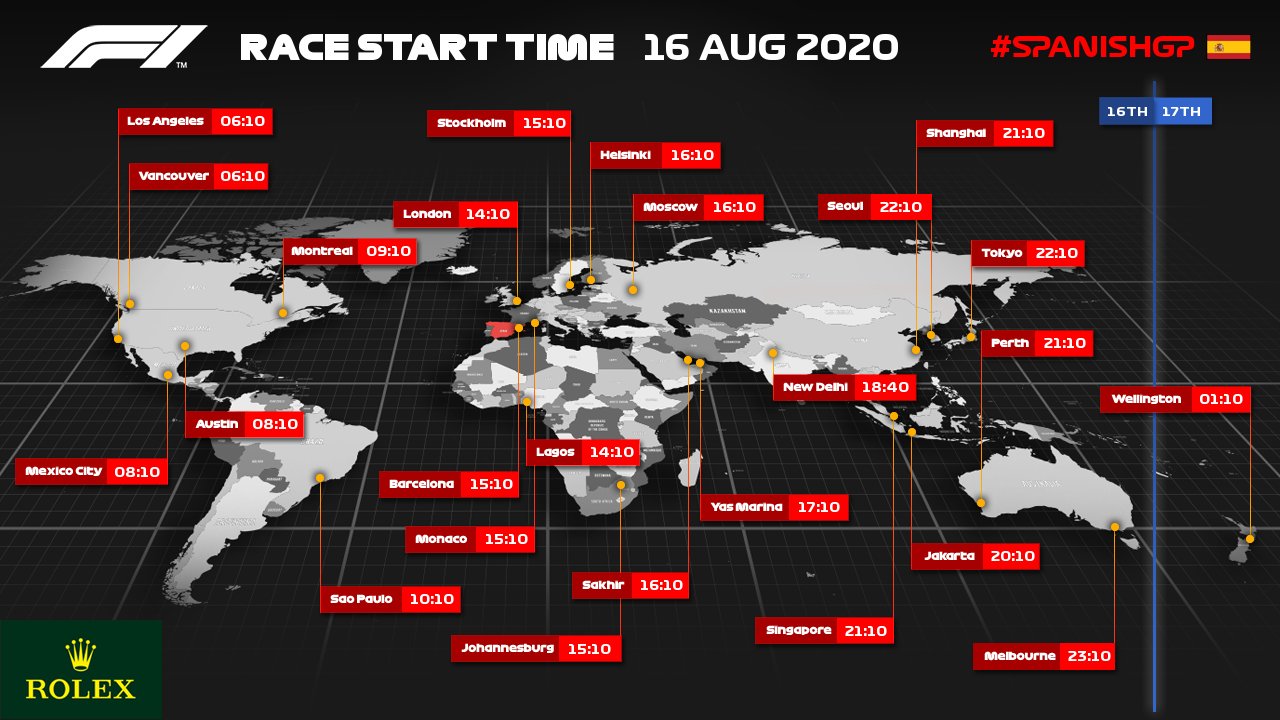 All timings are given in Spanish local time which is GMT+2.

It has two DRS activation zones

It has a mix of slow and high speed corners.

Michael Schumacher has been the most successful driver at the circuit, with a total of six victories. Among the current drivers, Kimi Raikkonen, Sebastian Vettel, and Lewis Hamilton all have won there. It’s been a happy hunting ground for Lewis Hamilton who has completed his hat-trick of wins last year. Hamilton has total 4 wins in Spanish GP 2014, 2017, 2018 & 2019.

Lewis Hamilton is still sitting on the top of championship table with a clear lead of 30 points over Max Verstappen. However, Max Vestappen has toppled Valtteri Bottas for the second place. It’s going to be close battle for the second place between Bottas & Verstappen, they are separated by just four points. Charles Leclerc doing some good work for Ferrari, he has scored two podiums in first five races. Considering the ability of the red car this year it seems to be a very good result. He is currently at 4th position with 45 points.