After a week off the F1 kicked off in Silverstone with British GP 2020 Practice race. We already saw jolt as Sergio Perez Tested Positive for Covid 19 on the eve of practice race. Nico Hülkenberg made a comeback with a last minute entry. Considering he was back after a 9 months gap his performance was very impressive. He finished 9th in the first practice race and 7th in the second practice session. Racing Point impressive run continues as Lance Stroll topped the time sheet in second practice race. Suprisingly Alex Albon who coould only do 13 laps in second session came second. His session ended as he collided with the with the barriers. Earlier Max Verstappen set the pace by topping the time-sheets in the first practice race, he was followed by Hamilton & Stroll. Sportsfeista brings you complete details of F1 British GP 2020 Qualifying Race Live Stream, Schedule & Practice Race Results & Highlights.

The battle of the pole will begin tomorrow, it will be interesting to see who will start from the front row on the grid. Considering the challenge that the Silverstone circuit poses, pole becomes extremely important.

There is plenty of action on the first day of British GP 2020 at Silverstone. But it was Nico Hülkenberg  who replaced Sergio Perez got a lot of attention.

An up-and-down afternoon for @alex_albon

He ended P2 in second practice ⏱

But first came this big collision with the barriers at Stowe 💥#BritishGP 🇬🇧 #F1 pic.twitter.com/hV9c0d6I0V 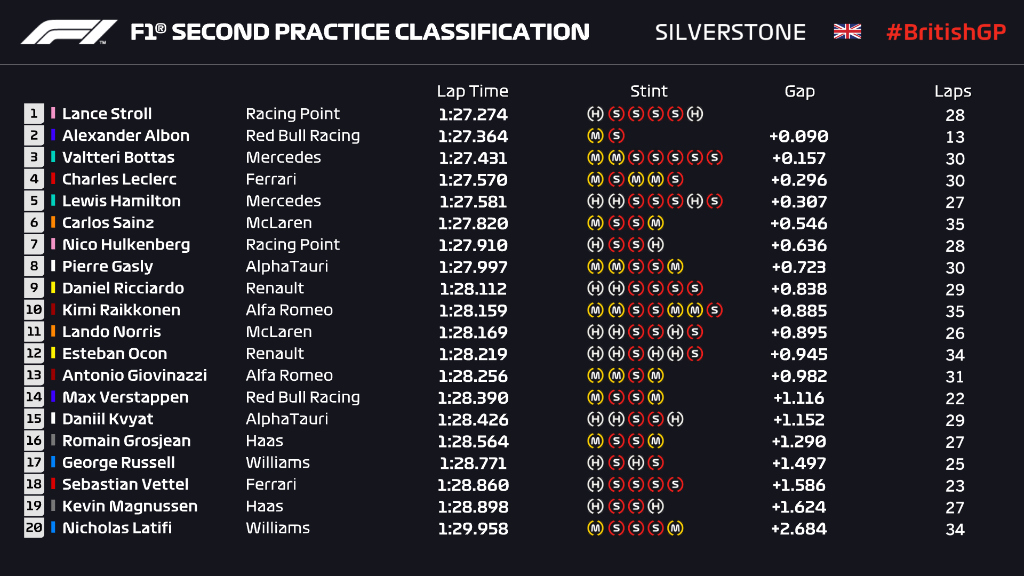 As quoted on F1.com